English translation of the meaning of quran Page No 541

Surah Al-Hadid | from the moshaf in arabic uthmani 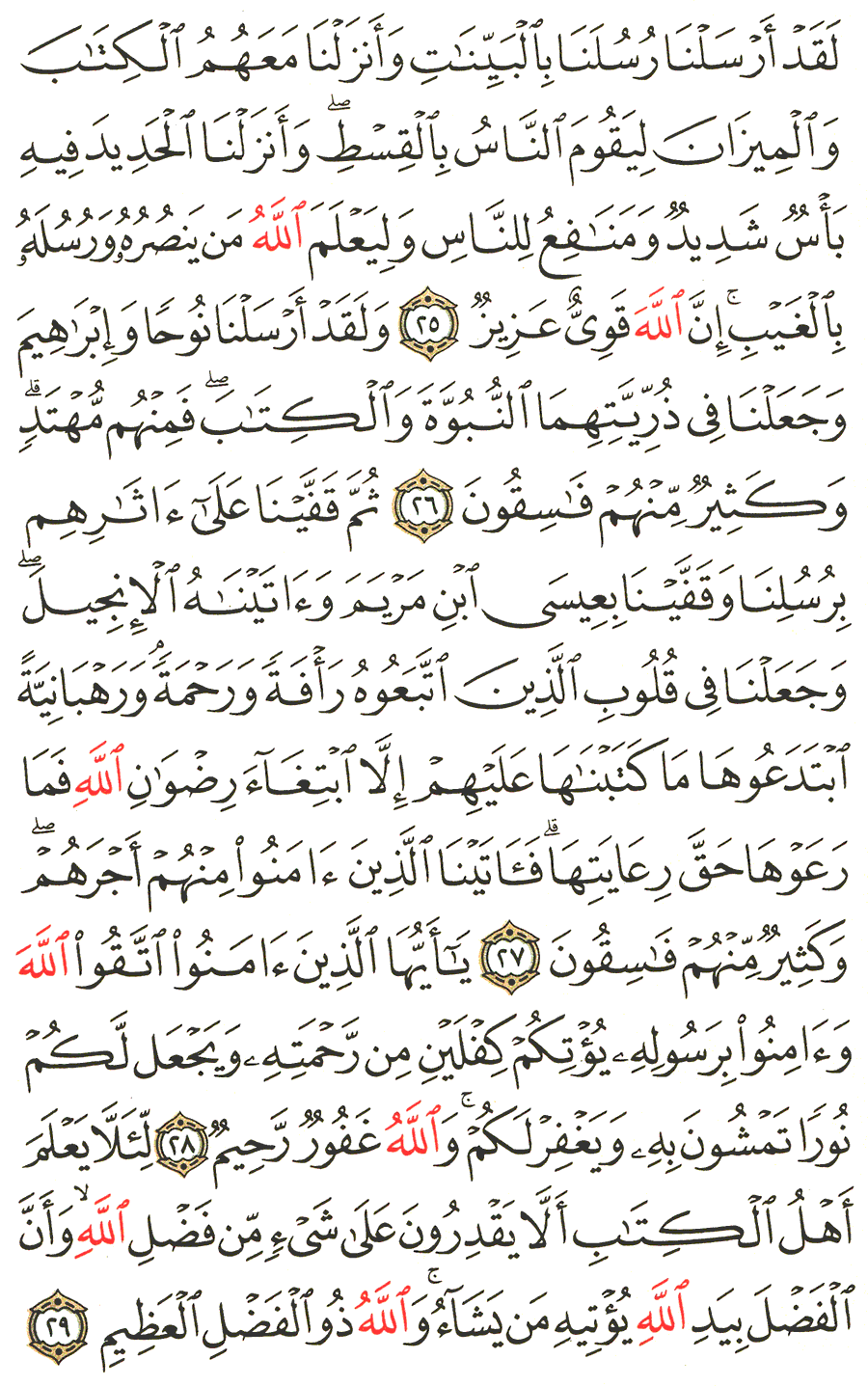 English translation of the meaning Page No 541

25. Indeed We have sent Our Messengers with clear proofs, and revealed with them the Scripture and the Balance ( justice ) that mankind may keep up justice. And We brought forth iron wherein is mighty power ( in matters of war [ 1 ] ) , as well as many benefits for mankind, that Allâh may test who it is that will help Him ( His religion ) and His Messengers in the unseen. Verily, Allâh is All- Strong, All- Mighty.
26. And indeed, We sent Nûh ( Noah ) and Ibrâhîm ( Abraham ) , and placed in their offspring Prophethood and Scripture. And among them there are some who are guided; but many of them are Fâsiqûn ( rebellious, disobedient to Allâh ) .
27. Then, We sent after them Our Messengers, and We sent ‘Îsâ ( Jesus ) - son of Maryam ( Mary ) , and gave him the Injeel ( Gospel ) . And We ordained in the hearts of those who followed him compassion and mercy. But the monasticism which they invented for themselves, We did not prescribe for them, but ( they sought it ) only to please Allâh therewith, but they did not observe it with the right observance. So We gave those among them who believed their ( due ) reward; but many of them are Fâsiqûn ( rebellious, disobedient to Allâh ) .
28. O you who believe [ in Mûsâ ( Moses ) ( i.e. Jews ) and ‘Îsâ ( Jesus ) ( i.e. Christians ) ] ! Fear Allâh, and believe in His Messenger ( Muhammad ( saas ) ) , He will give you a double portion of His Mercy, and He will give you a light by which you shall walk ( straight ) . And He will forgive you. And Allâh is Oft- Forgiving, Most Merciful. [ 2 ]
29. So that the people of the Scripture ( Jews and Christians ) may know that they have no power whatsoever over the Grace of Allâh, and that ( His ) Grace is ( entirely ) in His Hand to bestow it on whomsoever He wills. And Allâh is the Owner of Great Bounty.