English translation of the meaning of quran Page No 115

Surah Al-Maidah | from the moshaf in arabic uthmani 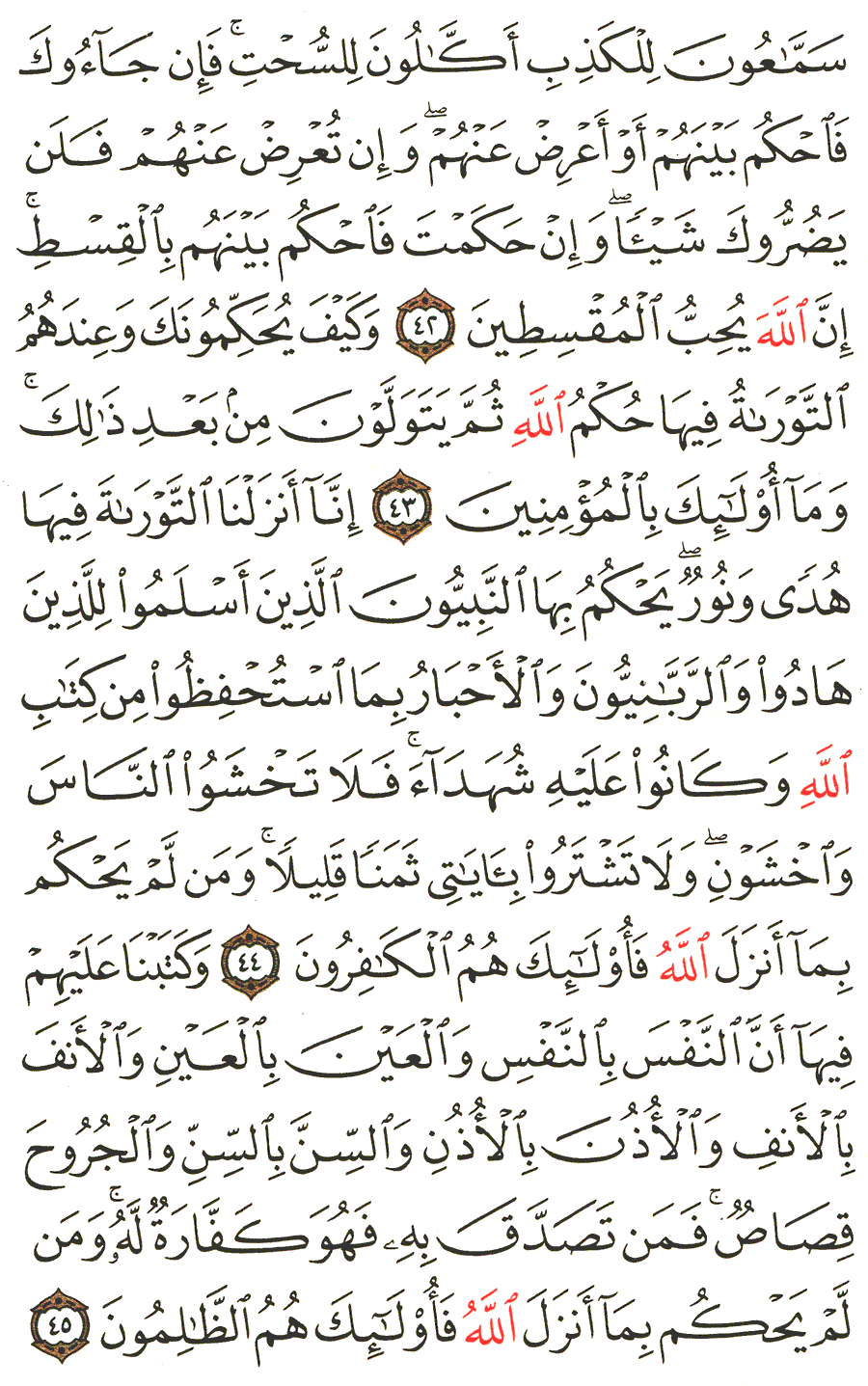 English translation of the meaning Page No 115

42. ( They like to ) listen to falsehood, to devour anything forbidden. So if they come to you ( O Muhammad ( saas ) ) , either judge between them, or turn away from them. If you turn away from them, they cannot hurt you in the least. And if you judge, judge with justice between them. Verily, Allâh loves those who act justly.
43. But how do they come to you for decision while they have the Taurât ( Torah ) , in which is the ( plain ) Decision of Allâh; yet even after that, they turn away. For they are not ( really ) believers.
44. Verily, We did send down the Taurât ( Torah ) [ to Mûsâ ( Moses ) ] , therein was guidance and light, by which the Prophets, who submitted themselves to Allâh’s Will, judged for the Jews. And the rabbis and the priests [ too judged for the Jews by the Taurât ( Torah ) after those Prophets ] , for to them was entrusted the protection of Allâh’s Book, and they were witnesses thereto. Therefore fear not men but fear Me ( O Jews ) and sell not My Verses for a miserable price. And whosoever does not judge by what Allâh has revealed, such are the Kâfirûn ( i.e. disbelievers - of a lesser degree as they do not act on Allâh’s Laws ) . [ 1 ]
45. And We ordained therein for them: « Life for life, [ 2 ] eye for eye, nose for nose, ear for ear, tooth for tooth, and wounds equal for equal. » But if anyone remits the retaliation by way of charity, it shall be for him an expiation. And whosoever does not judge by that which Allâh has revealed, such are the Zâlimûn ( polytheists and wrong- doers - of a lesser degree ) .

[2] (V.5:45) Narrated ‘Abdullâh (raa): Allâh’s Messenger (saas) said, "The blood of a Muslim who confesses that Lâ ilaha illallâh (none has the right to be worshipped but Allâh) and that I am the Messenger of Allâh, cannot be shed except in three cases.
1 ) Life for life in case of intentional murder without right [ i.e. in Qisâs ( Law of Equality in punishment ) ] ,
2 ) A married person who commits illegal sexual intercourse, and
3 ) The one who reverts from Islâm ( apostates ) and leaves the group of Muslims ( by innovating heresy, new ideas, new things in the Islâmic Religion ) . ( See Fath Al- Bari Vol. 15, page No.220, for details ) . ( Sahih Al- Bukhâri, Vol.9, Hadîth No.17 ) .