English translation of the meaning of quran Page No 42

Surah Al-Baqarah | from the moshaf in arabic uthmani 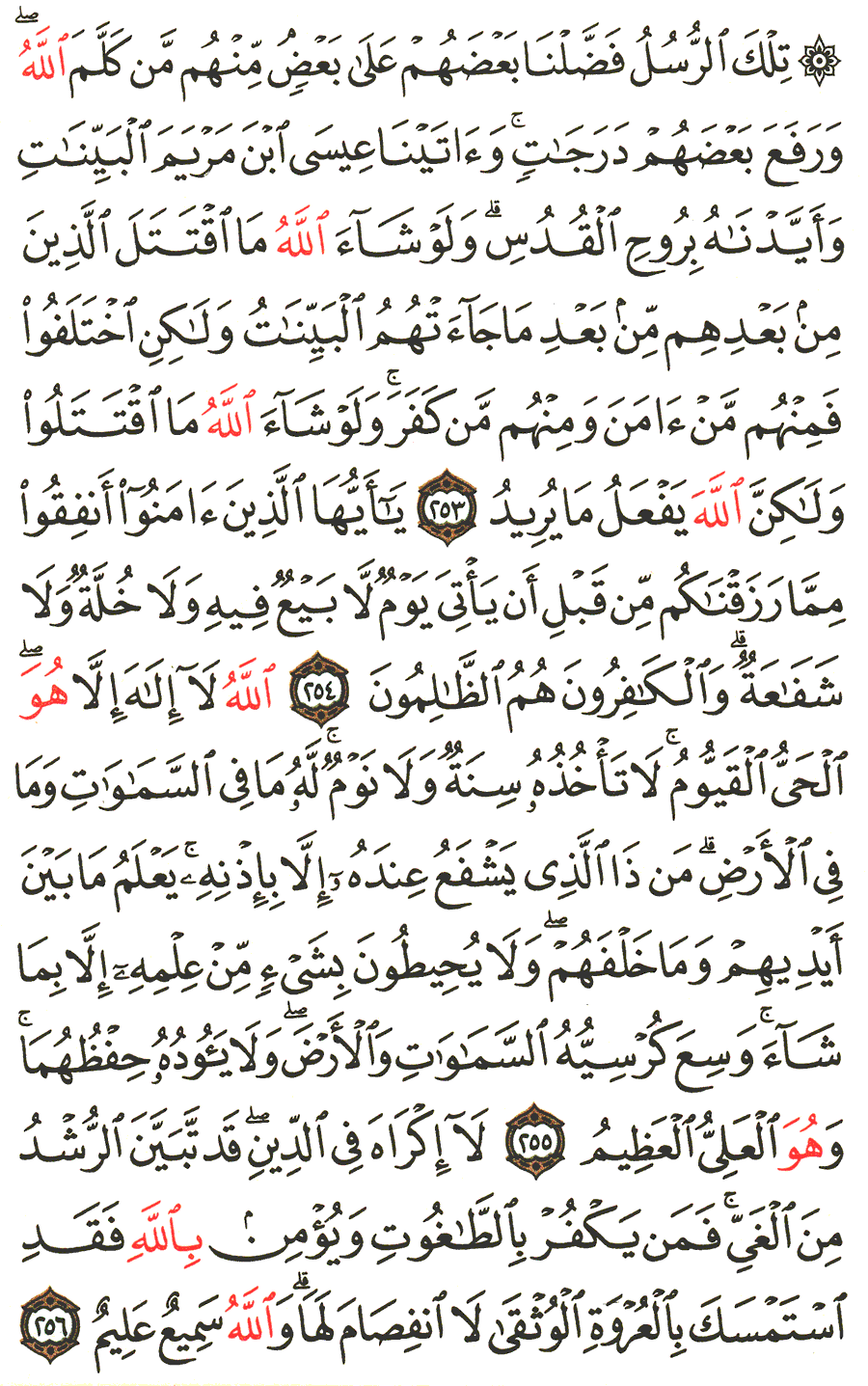 English translation of the meaning Page No 42

253. Those Messengers! We preferred some of them to others; to some of them Allâh spoke ( directly ) ; others He raised to degrees ( of honour ) ; and to ‘Îsâ ( Jesus ) , the son of Maryam ( Mary ) , We gave clear proofs and evidence, and supported him with Rûh- ul- Qudus [ Jibrael ( Gabriel ) ] . If Allâh had willed, succeeding generations would not have fought against each other, after clear Verses of Allâh had come to them, but they differed - some of them believed and others disbelieved. If Allâh had willed, they would not have fought against one another, but Allâh does what He likes.
254. O you who believe! Spend of that with which We have provided for you, before a Day comes when there will be no bargaining, nor friendship, nor intercession. And it is the disbelievers who are the Zâlimûn ( wrong- doers ) .
255. Allâh! Lâ ilâha illa Huwa ( none has the right to be worshipped but He ) , Al- Hayyul- Qayyum ( the Ever Living, the One Who sustains and protects all that exists ) . Neither slumber nor sleep overtakes Him. To Him belongs whatever is in the heavens and whatever is on the earth. Who is he that can intercede with Him except with His Permission? He knows what happens to them ( His creatures ) in this world, and what will happen to them in the Hereafter. And they will never compass anything of His Knowledge except that which He wills. His Kursî [ 1 ] extends over the heavens and the earth, and He feels no fatigue in guarding and preserving them. And He is the Most High, the Most Great. [ This Verse 2:255 is called Ayat- ul- Kursî ]
256. There is no compulsion in religion. Verily, the Right Path has become distinct from the wrong path. Whoever disbelieves in Tâghût [ 2 ] and believes in Allâh, then he has grasped the most trustworthy handhold that will never break. And Allâh is All- Hearer, All- Knower.

[1] (V.2:255). Kursî: literally a footstool or chair, and sometimes wrongly translated as Throne. The Kursî mentioned in this Verse should be distinguished from the ‘Arsh (Throne) mentioned in V.7:54, 10:3, 85:15 and elsewhere. Prophet Muhammad (saas) said: "The Kursî compared to the ‘Arsh is nothing but like a ring thrown out upon open space of the desert." If the Kursî extends over the entire universe, then how much greater is the ‘Arsh Indeed Allâh, the Creator of both the Kursî and the ‘Arsh , is the Most Great. Ibn Taimiyah said:
a ) To believe in the Kursî
b ) To believe in the ‘Arsh ( Throne ) . It is narrated from Muhammad bin ‘Abdullâh and from other religious scholars that the Kursî is in front of the ‘Arsh ( Throne ) and it is at the level of the Feet. [ Fatawa Ibn Taimiyah , Vol.5, Pages 54,55 ]
Narrated Abu Hurairah ( raa ) : Allâh’s Messenger ( saas ) ordered me to guard the Zakât revenue of Ramadân. Then somebody came to me and started stealing of the foodstuff. I caught him and said, « I will take you to Allâh’s Messenger ( saas ) ! » Then Abu Hurairah described the whole narration and said: That person said ( to me ) , « ( Please don’t take me to Allâh’s Messenger ( saas ) and I will tell you a few words by which Allâh will benefit you ) . When you go to your bed, recite Ayat- ul- Kursî , ( 2:255 ) for then there will be a guard from Allâh who will protect you all night long, and Satan will not be able to come near you till dawn. » ( When the Prophet ( saas ) heard the story ) he said ( to me ) , « He ( who came to you at night ) told you the truth although he is a liar; and it was Satan. » ( Sahih Al- Bukhâri, Vol. 6, Hadîth No.530 ) .

[2] (V.2:256) The word Tâghût covers a wide range of meanings: It means anything worshipped other than the Real God (Allâh), but the one who does not accept to be worshipped will not be considered as a Tâghût, i.e. all the false deities. It may be Satan, devils, idols, stones, sun, stars, angels, human beings, who were falsely worshipped and taken as Tâghûts Likewise saints, graves, rulers, leaders, etc., are falsely worshipped and wrongly followed. Sometimes "Tâghût" means a false judge who gives a false judgement (see V.4:60). [See Tafsir Ibn Kathir and (V.4:51)].