The Noble Quran English translation of the meaning Surah Fussilat

Surah Fussilat | from the moshaf in arabic uthmani 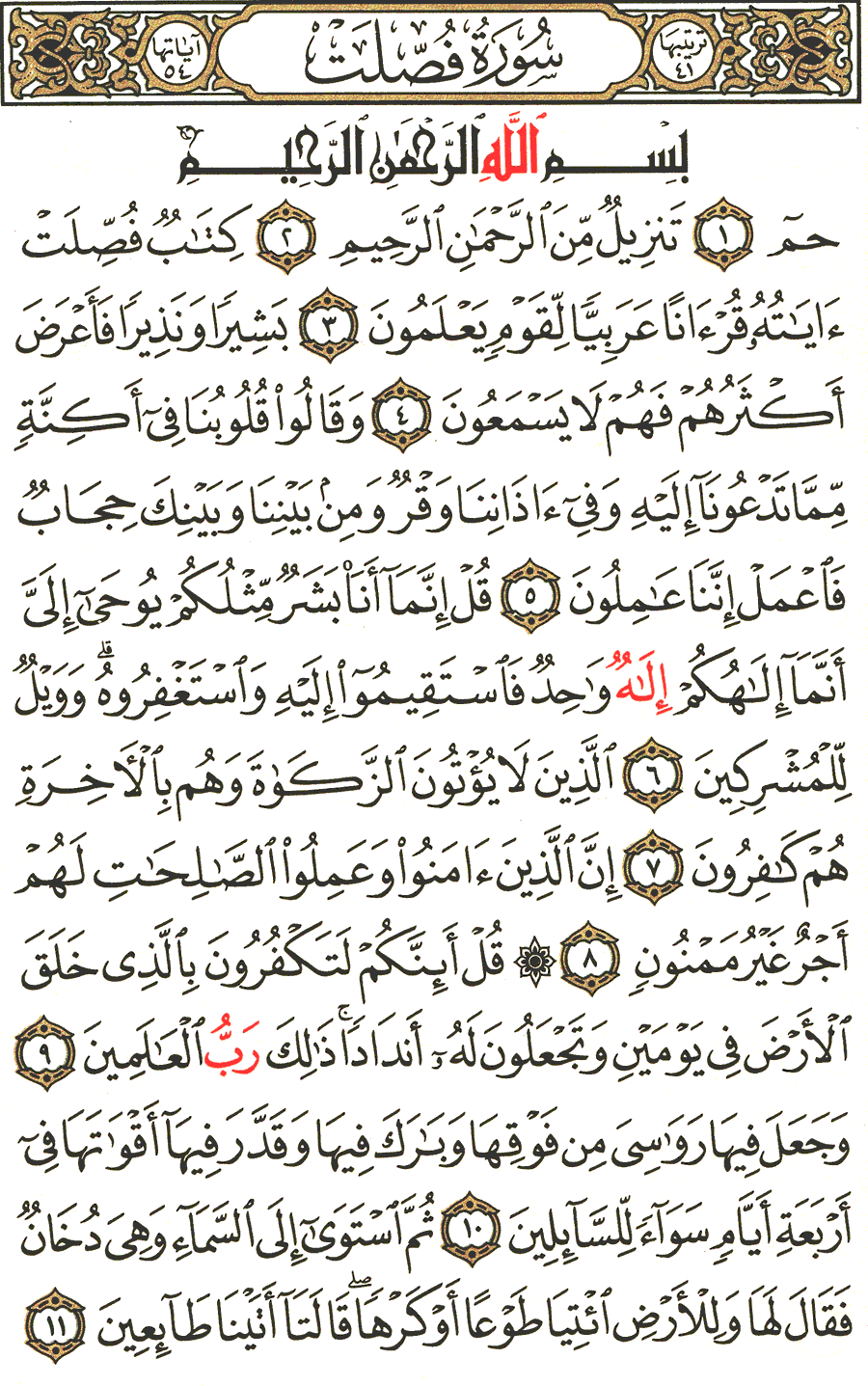 English translation of the meaning Page No 477

Sûrat Fussilat
( They are Explained in detail ) XLI
In the Name of Allâh,
the Most Gracious, the Most Merciful
1. Hâ- Mîm.

[These letters are one of the miracles of the Qur’ân, and none but Allâh (Alone) knows their meanings].
2. A revelation from ( Allâh ) , the Most Gracious, the Most Merciful.
3. A Book whereof the Verses are explained in detail - a Qur’ân in Arabic for people who know.
4. Giving glad tidings [ of Paradise to the one who believes in the Oneness of Allâh ( i.e. Islâmic Monotheism ) and fears Allâh much ( abstains from all kinds of sins and evil deeds ) and loves Allâh much ( performing all kinds of good deeds which He has ordained ) ] , and warning ( of punishment in the Hell- Fire to the one who disbelieves in the Oneness of Allâh ) , but most of them turn away, so they hear not.
5. And they say: « Our hearts are under coverings ( screened ) from that to which you invite us; and in our ears is deafness, and between us and you is a screen: so work you ( on your way ) ; verily, we are working ( on our way ) . »
6. Say ( O Muhammad ( saas ) ) : « I am only a human being like you. It is revealed to me that your Ilâh ( God ) is One Ilâh ( God - Allâh ) , therefore take Straight Path to Him ( with true Faith - Islâmic Monotheism ) and obedience to Him, and seek forgiveness of Him. And woe to Al- Mushrikûn ( the polytheists, idolaters, disbelievers in the Oneness of Allâh ) .»
7. Those who give not the Zakât and they are disbelievers in the Hereafter.
8. Truly, those who believe ( in the Oneness of Allâh, and in His Messenger Muhammad ( saas ) - Islâmic Monotheism ) and do righteous good deeds, for them will be an endless reward that will never stop ( i.e. Paradise ) .
9. Say ( O Muhammad ( saas ) ) : « Do you verily disbelieve in Him Who created the earth in two Days? And you set up rivals ( in worship ) with Him? That is the Lord of the ‘Âlamîn ( mankind, jinn and all that exists ) .»
10. He placed therein ( i.e. the earth ) firm mountains from above it, and He blessed it, and measured therein its sustenance ( for its dwellers ) in four Days equal ( i.e. all these four days were equal in the length of time ) for all those who ask ( about its creation ) .
11. Then He rose over ( Istawâ ) towards the heaven when it was smoke, and said to it and to the earth: « Come both of you willingly or unwillingly. » They both said: « We come willingly. »