English translation of the meaning of quran Page No 517

Surah Al-Hujurat | from the moshaf in arabic uthmani 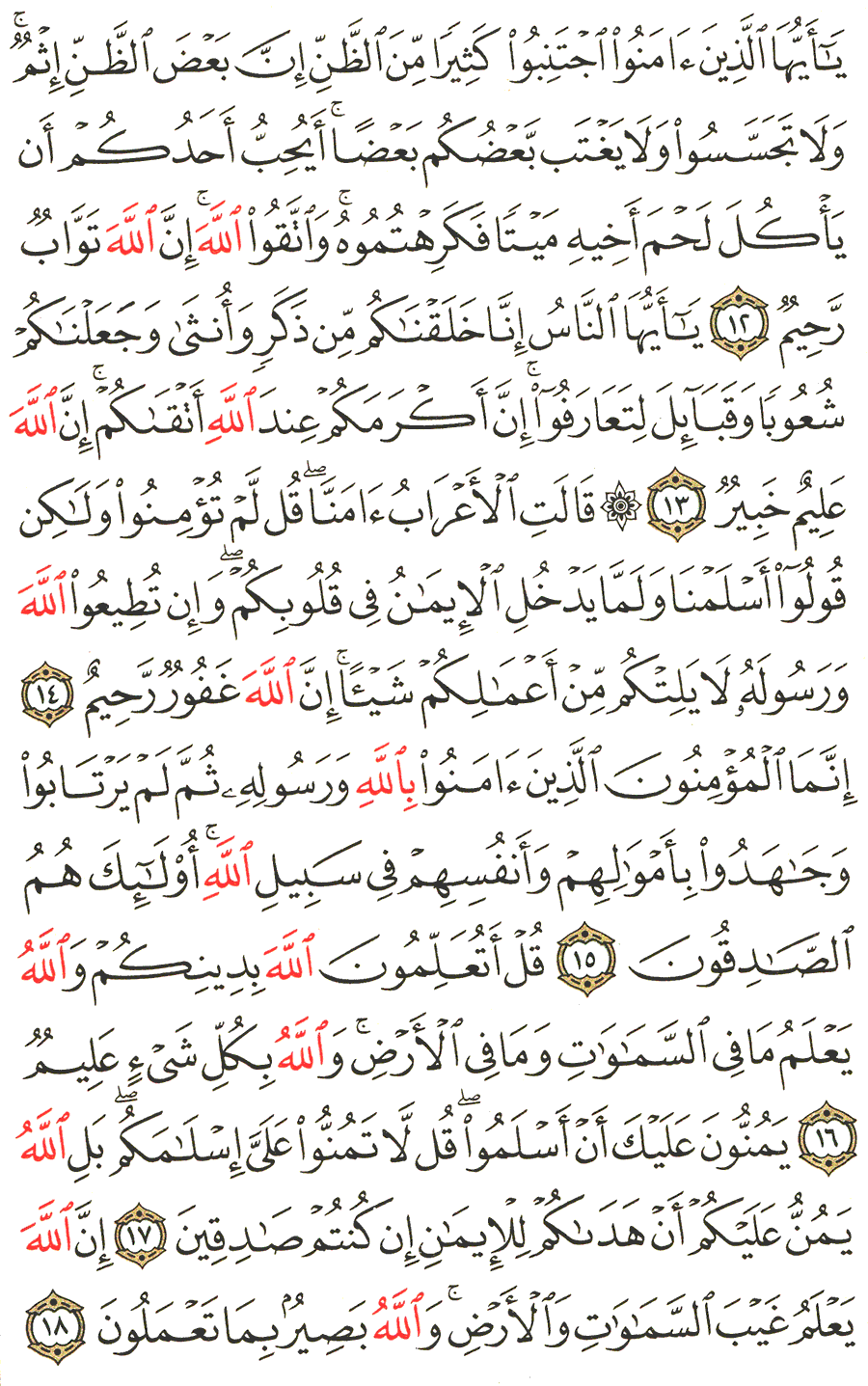 English translation of the meaning Page No 517

12. O you who believe! Avoid much suspicion; indeed some suspicions are sins. And spy not, neither backbite one another. Would one of you like to eat the flesh of his dead brother? You would hate it ( so hate backbiting ) [ 1 ] . And fear Allâh. Verily, Allâh is the One Who forgives and accepts repentance, Most Merciful.
13. O mankind! We have created you from a male and a female, and made you into nations and tribes, that you may know one another. Verily, the most honourable of you with Allâh is that ( believer ) who has At- Taqwâ [ i.e. he is one of the Muttaqûn ( the pious. See V.2:2 ) ] . Verily, Allâh is All- Knowing, All- Aware.
14. The bedouins say: « We believe. » Say: « You believe not but you only say, ‘We have surrendered ( in Islâm ) ,’ for Faith has not yet entered your hearts. But if you obey Allâh and His Messenger ( ( saas ) ) , He will not decrease anything in reward for your deeds. Verily, Allâh is Oft- Forgiving, Most Merciful. »
15. Only those are the believers who have believed in Allâh and His Messenger, and afterward doubt not but strive with their wealth and their lives for the Cause of Allâh. Those! They are the truthful.
16. Say: « Will you inform Allâh of your religion while Allâh knows all that is in the heavens and all that is in the earth, and Allâh is All- Aware of everything.»
17. They regard as favour to you ( O Muhammad ( saas ) ) that they have embraced Islâm. Say: « Count not your Islâm as a favour to me. Nay, but Allâh has conferred a favour upon you that He has guided you to the Faith if you indeed are true.»
18. Verily, Allâh knows the Unseen of the heavens and the earth. And Allâh is the All- Seer of what you do.

[1] (V.49:12).
a ) Narrated Abû Hurairah ( raa ) Allâh’s Messenger ( saas ) said, « Beware of suspicion, for suspicion is the worst of false tales; and do not look for other’s faults, and do not do spying on one another, and do not practise Najsh* and do not be jealous of one another and do not hate one another, and do not desert ( stop talking to ) one another. And O Allâh’s worshippers! Be brothers! » ( Sahih Al- Bukhari, Vol.8, Hadîth No.92 ) .
b ) Narrated Hudhaifah ( raa ) : I heard the Prophet ( saas ) saying, « A Qattât ** will not enter Paradise. » ( Sahih Al- Bukhari, Vol.8, Hadîth No.82 ) .
c ) Backbiting and the Statement of Allâh ( Lord Almighty and Exalted ) : « And spy not, neither backbite one another. »
Narrated Ibn ‘Abbâs ( raa ) : Allâh’s Messenger ( saas ) passed by two graves and said, « Both of them ( persons in the grave ) are being tortured, and they are not being tortured for a major sin. This one used not to save himself from being soiled with his urine, and the other used to go about with calumnies ( among the people to rouse hostilities, e.g., one goes to a person and tells him that so- and- so says about him such and such evil things ) . » The Prophet ( saas ) then asked for a green branch of a date- palm tree, split it into two pieces and planted one on each grave and said, « It is hoped that their punishment may be abated till those two pieces of the branch get dried. » *** ( Sahih Al- Bukhari, Vol.8, Hadîth No.78 ) .
* Najsh means to offer a high price for something in order to allure another customer who is interested in the thing.
**A Qattât is a person who conveys disagreeable, false information from one person to another with the intention of causing harm and enmity between them.
***This action was a kind of invocation on the part of the Prophet ( saas ) for the deceased persons. [ Fath Al- Bari, Vol.1, Page 332 ] .