English translation of the meaning of quran Page No 150

Surah Al-An'am | from the moshaf in arabic uthmani 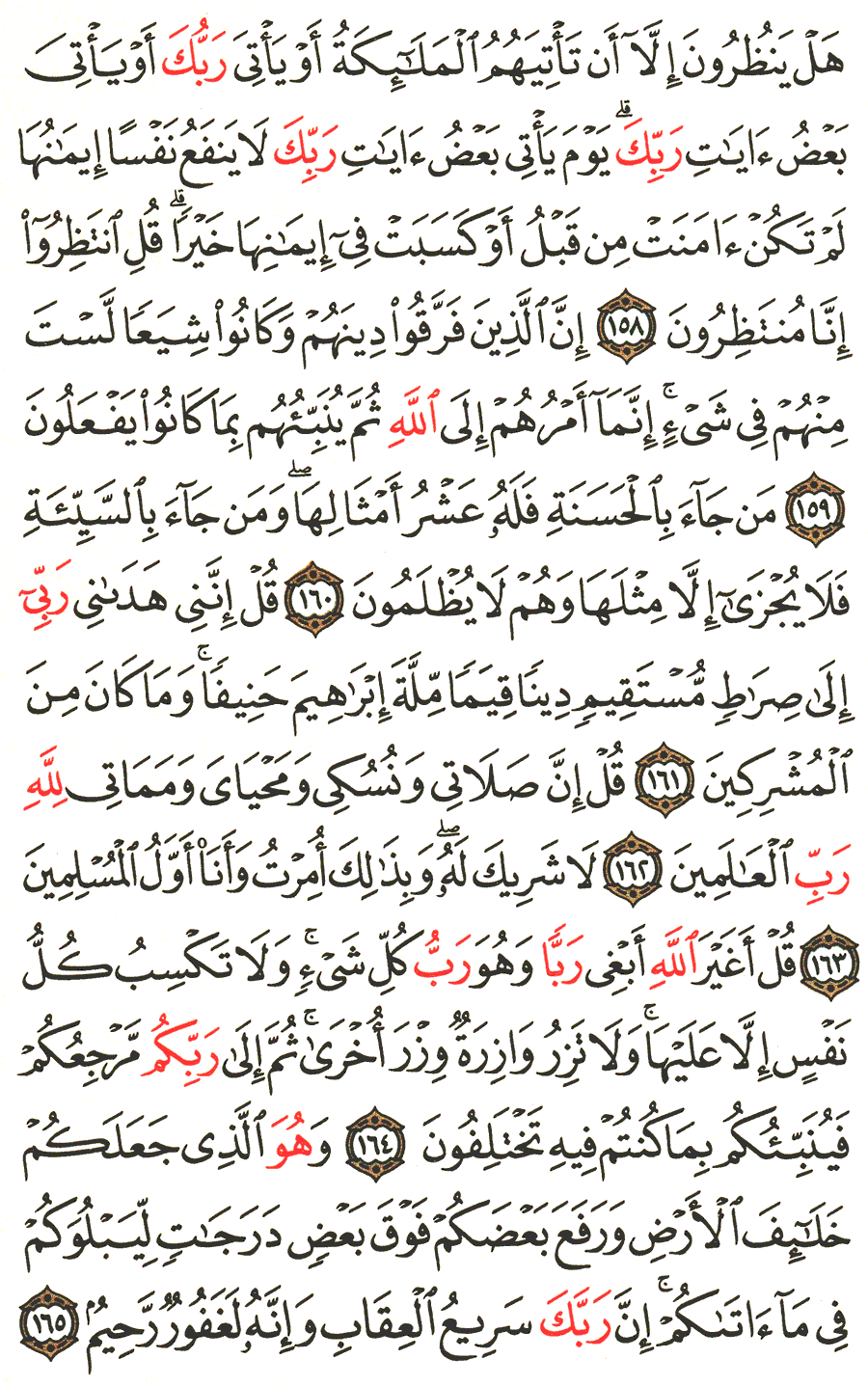 English translation of the meaning Page No 150

158. Do they then wait for anything other than that the angels should come to them, or that your Lord ( Allâh ) should come, or that some of the Signs of your Lord should come ( i.e. portents of the Hour e.g., rising of the sun from the west ) ! The day that some of the Signs of your Lord do come, no good will it do to a person to believe then, if he believed not before, nor earned good ( by performing deeds of righteousness ) through his Faith. Say: « Wait you! we ( too ) are waiting. » [ 1 ]
159. Verily, those who divide their religion and break up into sects ( all kinds of religious sects ) [ 2 ] , you ( O Muhammad ( saas ) ) have no concern in them in the least. Their affair is only with Allâh, Who then will tell them what they used to do.
160. Whoever brings a good deed ( Islâmic Monotheism and deeds of obedience to Allâh and His Messenger ( saas ) ) shall have ten times the like thereof to his credit, and whoever brings an evil deed ( polytheism, disbelief, hypocrisy, and deeds of disobedience to Allâh and His Messenger ( saas ) ) shall have only the recompense of the like thereof, and they will not be wronged. [ 3 ]
161. Say ( O Muhammad ( saas ) ) : « Truly, my Lord has guided me to a Straight Path, a right religion, the religion of Ibrâhîm ( Abraham ) , Hanîfa [ i.e. the true Islâmic Monotheism - to believe in One God ( Allâh i.e. to worship none but Allâh, Alone ) ] and he was not of Al- Mushrikûn ( See V.2:105 ) . »
162. Say ( O Muhammad ( saas ) ) : « Verily, my Salât ( prayer ) , my sacrifice, my living, and my dying are for Allâh, the Lord of the ‘Âlamîn ( mankind, jinn and all that exists ) .»
163. « He has no partner. And of this I have been commanded, and I am the first of the Muslims. »
164. Say: « Shall I seek a lord other than Allâh, while He is the Lord of all things? No person earns any ( sin ) except against himself ( only ) , and no bearer of burdens shall bear the burden of another. Then unto your Lord is your return, so He will tell you that wherein you have been differing. »
165. And it is He Who has made you generations coming after generations, replacing each other on the earth. And He has raised you in ranks, some above others that He may try you in that which He has bestowed on you. Surely your Lord is Swift in retribution, and certainly He is Oft- Forgiving, Most Merciful.

[2] (V.6:159) It is said that the Prophet (saas) recited this Verse and said: "These people are those who invent new things (Bid‘ah) in religion and the followers of the vain desires of this Muslim nation, and their repentance will not be accepted by Allâh." (TafsirAl-Qurtubi).

[It has been narrated in the Hadîth Books (At-Tirmidhi, Ibn Mâjah and Abu Dâwûd) that the Prophet (saas) said: "The Jews and the Christians will be divided into seventy-one or seventy-two religious sects and this nation will be divided into seventy-three religious sects, - all in Hell, except one, and that one is: on which I and my Companions are today, i.e. following the Qur’ân and the Prophet’s Sunnah (legal ways, orders, acts of worship, statements)"].