The Noble Quran English translation of the meaning Surah An-Nur

Surah An-Nur | from the moshaf in arabic uthmani 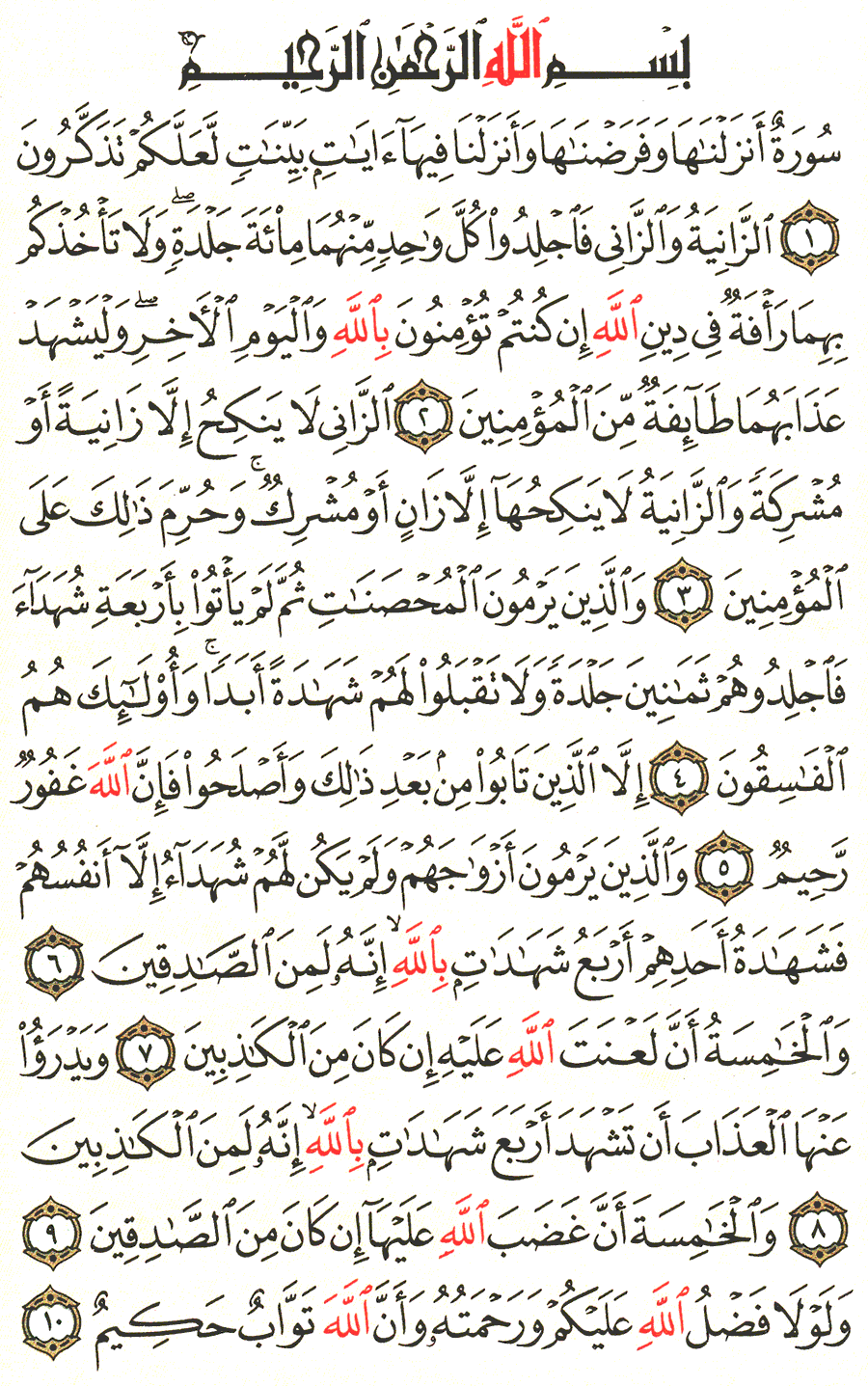 English translation of the meaning Page No 350

Sûrat An- Nûr
( The Light ) XXIV
In the Name of Allâh,
the Most Gracious, the Most Merciful
1. ( This is ) a Sûrah ( chapter of the Qur’ân ) which We have sent down and which We have enjoined, ( ordained its laws ) ; and in it We have revealed manifest Ayât ( proofs, evidence, verses, lessons, signs, revelations - lawful and unlawful things, and set boundaries of Islâmic Religion ) , that you may remember.
2. The fornicatress and the fornicator, flog each of them with a hundred stripes. Let not pity withhold you in their case, in a punishment prescribed by Allâh, if you believe in Allâh and the Last Day. And let a party of the believers witness their punishment. ( This punishment is for unmarried persons guilty of the above crime, but if married persons commit it ( illegal sex ) , the punishment is to stone them to death, according to Allâh’s Law ) . [ 1 ]
3. The adulterer- fornicator marries not but an adulteress- fornicatress or a Mushrikah, and the adulteress- fornicatress none marries her except an adulterer- fornicator or a Muskrik [ and that means that the man who agrees to marry ( have a sexual relation with ) a Mushrikah ( female polytheist, pagan or idolatress ) or a prostitute, then surely he is either an adulterer- fornicator, or a Mushrik ( polytheist, pagan or idolater ) . And the woman who agrees to marry ( have a sexual relation with ) a Mushrik ( polytheist, pagan or idolater ) or an adulterer- fornicator, then she is either a prostitute or a Mushrikah ( female polytheist, pagan, or idolatress ) ] . Such a thing is forbidden to the believers ( of Islâmic Monotheism ) .
4. And those who accuse chaste women, and produce not four witnesses, flog them with eighty stripes, and reject their testimony forever. They indeed are the Fâsiqûn ( liars, rebellious, disobedient to Allâh ) .
5. Except those who repent thereafter and do righteous deeds; ( for such ) verily, Allâh is Oft- Forgiving, Most Merciful.
6. And for those who accuse their wives, but have no witnesses except themselves, let the testimony of one of them be four testimonies ( i.e. testifies four times ) by Allâh that he is one of those who speak the truth.
7. And the fifth ( testimony should be ) the invoking of the Curse of Allâh on him if he be of those who tell a lie ( against her ) .
8. But it shall avert the punishment ( of stoning to death ) from her, if she bears witness four times by Allâh, that he ( her husband ) is telling a lie.
9. And the fifth ( testimony ) should be that the Wrath of Allâh be upon her if he ( her husband ) speaks the truth.
10. And had it not been for the Grace of Allâh and His Mercy on you ( He would have hastened the punishment upon you ) ! And that Allâh is the One Who forgives and accepts repentance, the All- Wise.

[1] (V.24:2)
a ) Narrated Abu Hurairah ( raa ) : Allâh’s Messenger ( saas ) judged that the unmarried person who was guilty of illegal sexual intercourse be exiled for one year and receive the legal punishment ( i.e., be flogged with one hundred stripes ) . ( Sahih Al- Bukhâri, Vol.8, Hadith No. 819 )
b ) Narrated Jâbir bin ‘Abdullâh Al- Ansâri ( raa ) : A man from the tribe of Bani Aslam came to Allâh’s Messenger ( saas ) and informed him that he had committed illegal sexual intercourse and he bore witness four times against himself. Allâh’s Messenger ( saas ) ordered him to be stoned to death as he was a married person. ( Sahih Al Bukhari, Vol.8, Hadith No.805 ) .
c ) See ( V.4:25 ) .