English translation of the meaning of quran Page No 410 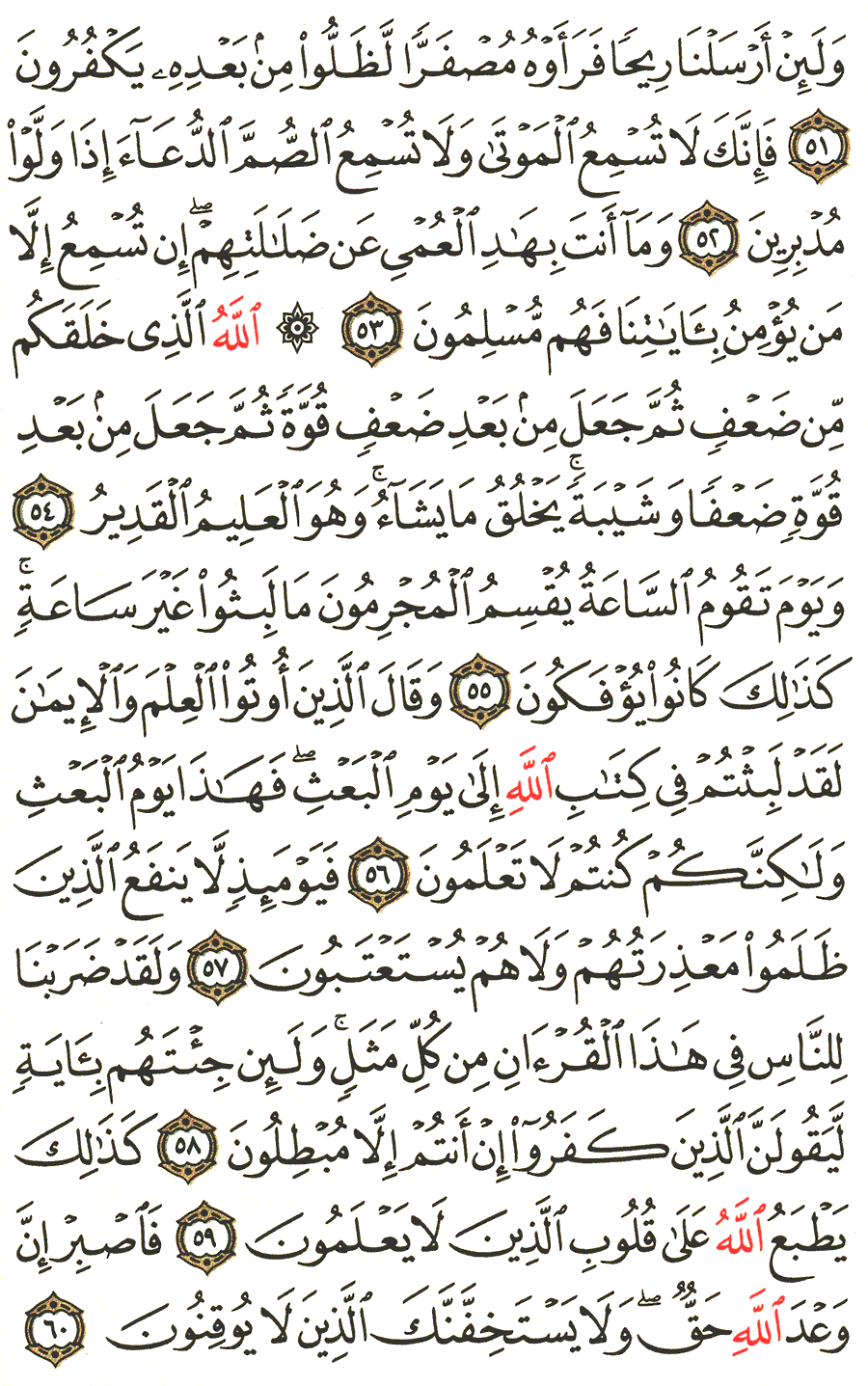 English translation of the meaning Page No 410

51. And if We send a wind [ which would spoil the green growth ( tilth ) brought up by the previous rain ] , and they see ( their tilth ) turn yellow - behold, they then ( after their being glad, ) would become unthankful ( to their Lord Allâh as ) disbelievers. [ Tafsir At- Tabari ]
52. So verily, you ( O Muhammad ( saas ) ) cannot make the dead to hear ( i.e. the disbelievers ) , nor can you make the deaf to hear the call, when they show their backs and turn away.
53. And you ( O Muhammad ( saas ) ) cannot guide the blind from their straying; you can make to hear only those who believe in Our Ayât ( proofs, evidence, verses, lessons, signs, revelations, etc. ) , and have submitted to Allâh in Islâm ( as Muslims ) .
54. Allâh is He Who created you in ( a state of ) weakness, then gave you strength after weakness, then after strength gave ( you ) weakness and grey hair. He creates what He wills. And it is He Who is the All- Knowing, the All- Powerful ( i.e. Able to do all things ) .
55. And on the Day that the Hour will be established, the Mujrimûn ( criminals, disbelievers, polytheists, sinners ) will swear that they stayed not but an hour - thus were they ever deluded [ away from the truth ( i.e. they used to tell lies and take false oaths, and turn away from the truth ) in this life of the world ) ]
56. And those who have been bestowed with knowledge and faith will say: « Indeed you have stayed according to the Decree of Allâh, until the Day of Resurrection: so this is the Day of Resurrection, but you knew not. »
57. So on that Day no excuse of theirs will avail those who did wrong ( by associating partners in worship with Allâh, and by denying the Day of Resurrection ) , nor will they be allowed ( then ) to return to seek Allâh’s Pleasure ( by having Islâmic Faith with righteous deeds and by giving up polytheism, sins and crimes with repentance ) .
58. And indeed We have set forth for mankind, in this Qur’ân every kind of parable. But if you ( O Muhammad ( saas ) ) bring to them any sign or proof ( as an evidence for the truth of your Prophethood ) , the disbelievers are sure to say ( to the believers ) : « You follow nothing but falsehood, and magic. »
59. Thus does Allâh seal up the hearts of those who know not [ the proofs and evidence of the Oneness of Allâh i.e. those who try not to understand true facts that which you ( Muhammad ( saas ) ) have brought to them ] .
60. So be patient ( O Muhammad ( saas ) ) . Verily, the Promise of Allâh is true; and let not those who have no certainty of faith, discourage you from conveying Allâh’s Message ( which you are obliged to convey ) .