The Noble Quran English translation of the meaning Surah An-Nahl

Surah An-Nahl | from the moshaf in arabic uthmani 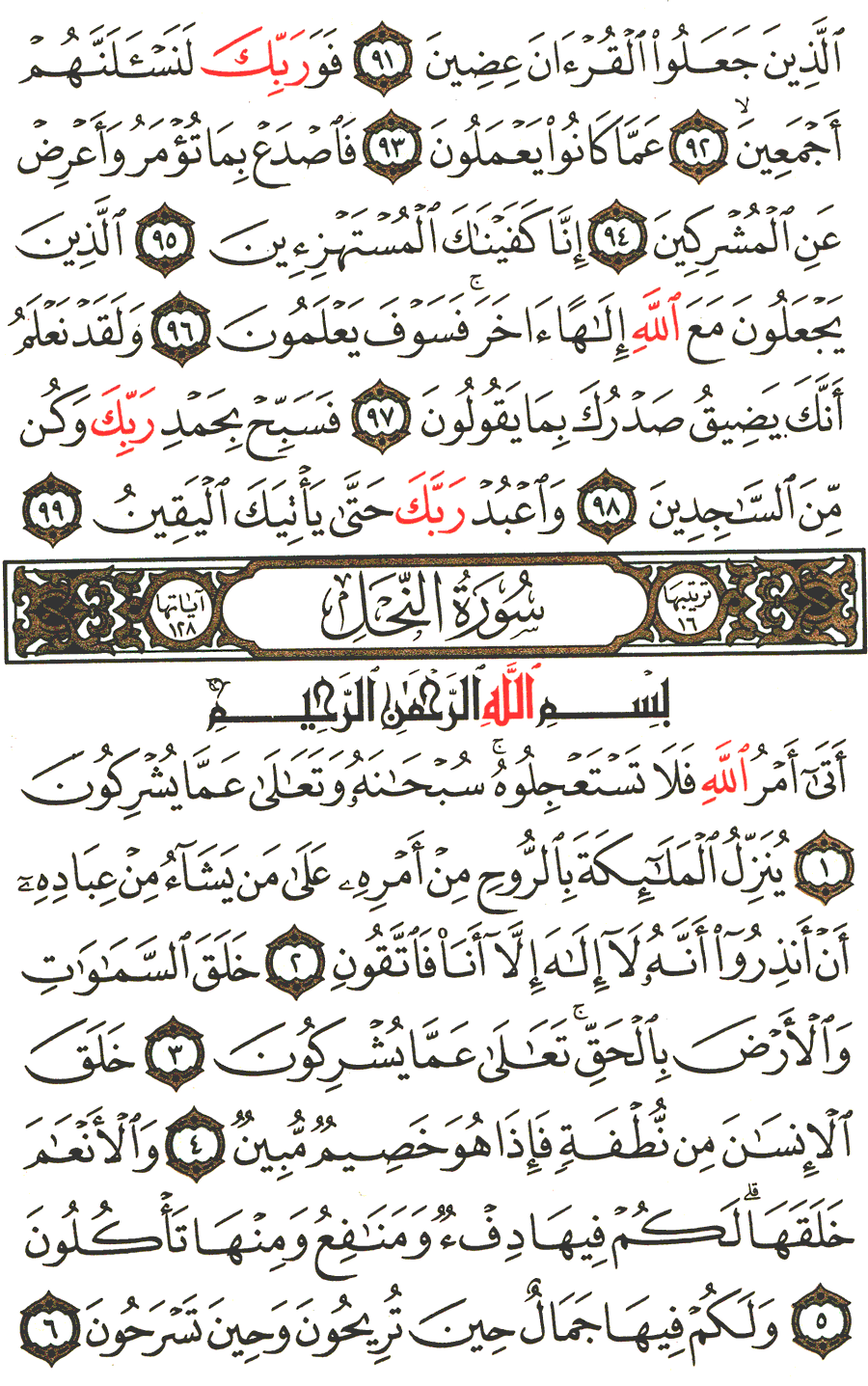 English translation of the meaning Page No 267

91. Who have made the Qur’ân into parts. ( i.e. believed in one part and disbelieved in the other ) . [ Tafsir At- Tabari ]
92. So, by your Lord ( O Muhammad ( saas ) ) , We shall certainly call all of them to account.
93. For all that they used to do.
94. Therefore proclaim openly ( Allâh’s Message - Islâmic Monotheism ) that which you are commanded, and turn away from Al- Mushrikûn ( polytheists, idolaters, and disbelievers - See V.2:105 ) .
95. Truly! We will suffice you against the scoffers,
96. Who set up along with Allâh another ilâh ( god ) ; but they will come to know.
97. Indeed, We know that your breast is straitened at what they say.
98. So glorify the praises of your Lord and be of those who prostrate themselves ( to Him ) . [ 1 ]
99. And worship your Lord until there comes unto you the certainty ( i.e. death ) . [ 2 ]
Sûrat An- Nahl
( The Bees ) XVI
In the Name of Allâh,
the Most Gracious, the Most Merciful
1. The Event ( the Hour or the punishment of disbelievers and polytheists or the Islâmic laws or commandments ) ordained by Allâh will come to pass, so seek not to hasten it. Glorified and Exalted be He above all that they associate as partners with Him.
2. He sends down the angels with the Rûh ( revelation ) of His Command to whom of His slaves He wills ( saying ) : « Warn mankind that Lâ ilâha illâ Ana ( none has the right to be worshipped but I ) , so fear Me ( by abstaining from sins and evil deeds ) .»
3. He has created the heavens and the earth with truth. High is He, Exalted above all that they associate as partners with Him.
4. He has created man from Nutfah ( mixed drops of male and female sexual discharge ) , then behold, this same ( man ) becomes an open opponent.
5. And the cattle, He has created them for you; in them there is warmth ( warm clothing ) , and numerous benefits, and of them you eat.
6. And wherein is beauty for you, when you bring them home in the evening, and as you lead them forth to pasture in the morning.

[2] (V.15:99) Narrated Anas (raa): Allâh’s Messenger (saas) said, "None of you should long for death because of a calamity that had befallen him; and if he cannot, but long for death, then he should say, ‘O Allâh! Let me live as long as life is better for me, and take my life if death is better for me’" (Sahih Al-Bukhari, Vol.8, Hadith No.362).